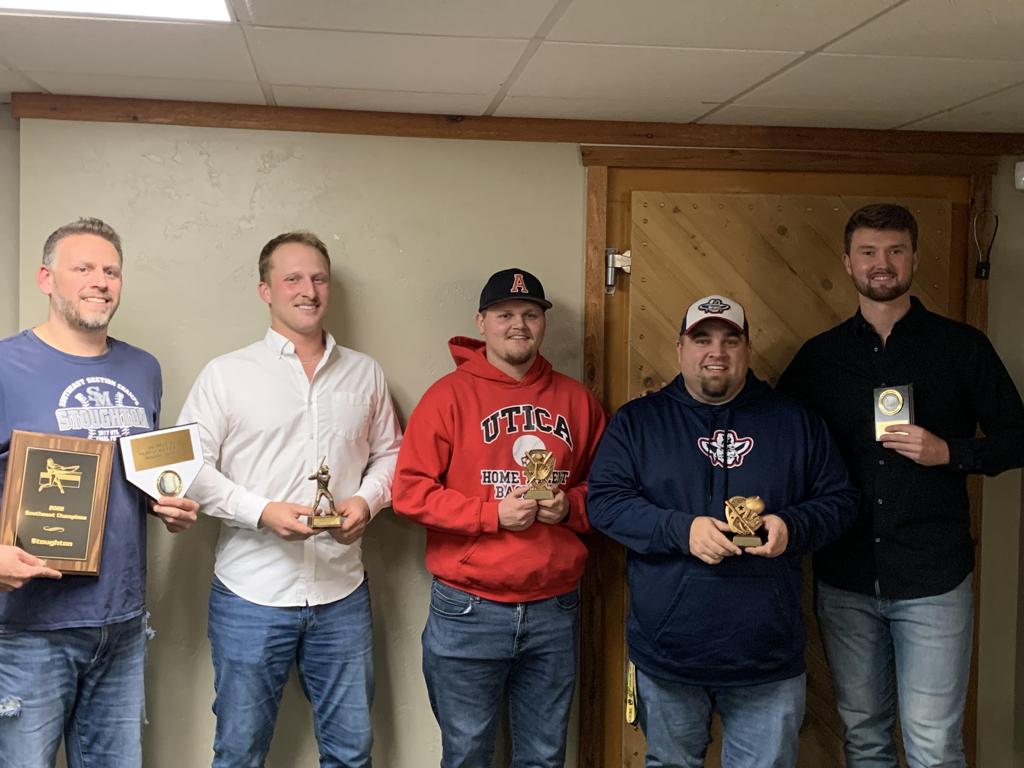 The Southeast Section of the Home Talent League held their post-season awards gathering at Creekview Par Three on November 5.  Pictured above, from left to right:

NOTE: Ballclubs will be ranked within their division BEFORE being compared to the opposite division, meaning that both divisions will be ranked one through five BEFORE the final seeds are determined.

When two clubs are tied for any place within their division, the winner is determined by:
1 - head-to-head record
2 - record within division
3 - Strength of Victory (total wins of defeated opponents)
4 - coin toss or one-game playoff

When more than two clubs are tied for any place within their division, the clubs are ranked and placed based on:
1 - head-to-head record amongst tied teams
2 - record within division
3 - Strength of Victory (total wins of defeated opponents)
4 - Coin toss or playoff game(s)

When clubs from opposite divisions are tied for a wild card spot(s) or a postseason seed, the winner is determined by:
1 - head-to-head record
2 - Strength of Victory (total wins of defeated opponents)
3 - coin toss or one-game playoff

ALL TIEBREAKER SITUATIONS ARE DETERMINED IN THE ORDER LISTED ABOVE.  IF NUMBER 1 DOES NOT BREAK THE TIE, GO TO NUMBER 2 AND CONTINUE UNTIL TIE IS BROKEN.

** Both teams must agree to a coin toss.  If one team wants to play, a game will be played.
** In the event of a one-game playoff, the date/time/site will be determined by HTL Executive Board unless teams come to an agreement by 7pm on the Monday following the end of the regular season.
** In the event that three or more clubs are going to playoff game(s), they will be entered in a random draw for home/away/bye to determine matchups for playoff game(s).