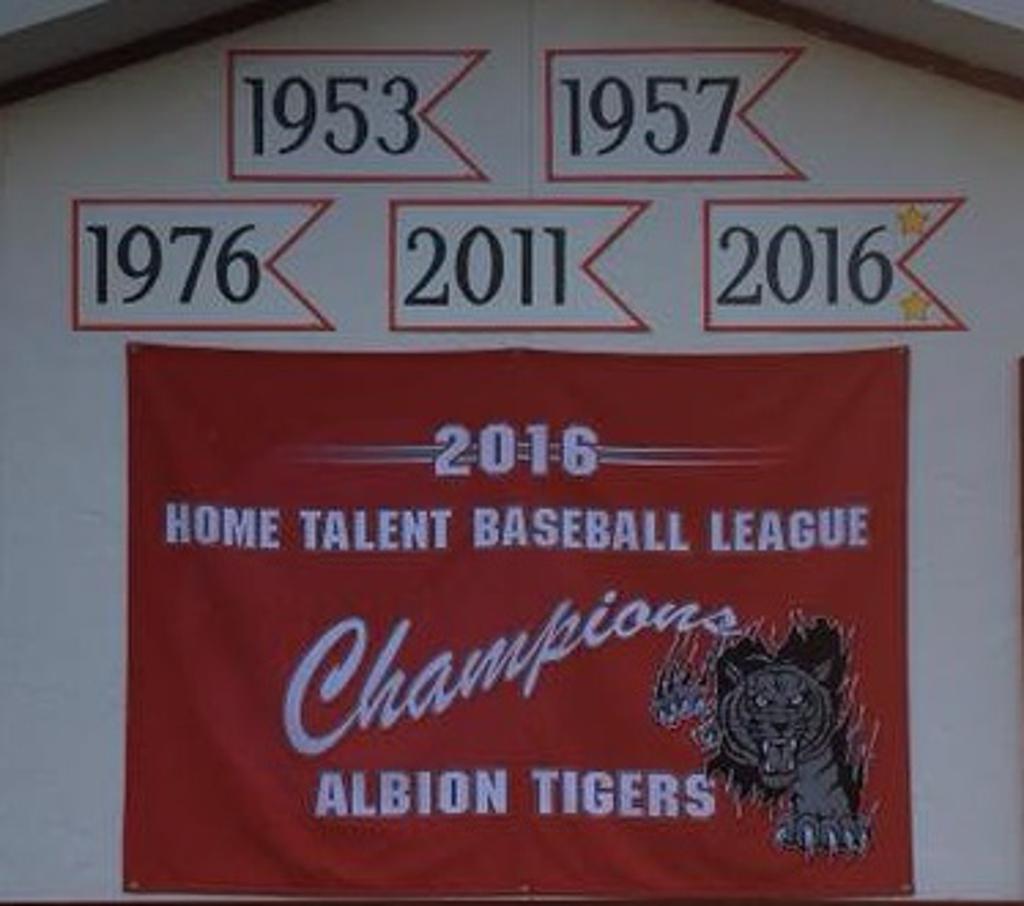 RT @EdgertonBBall: If any programs are looking for a game tonight, please text or call Daryl Fox at 608-751-1988 Referees and game time se…

RT @lodahl_ehssport: What a great high school basketball game, Tide wins in a close one over a good Lake Mills team 62-59 to remain undefea…

The Albion Tigers wrapped up their COVID-shortened exhibition season with a 7-3 loss at Rio on Sunday.   The defense was clean behind moundmen Brian Rusch and Charlie Hatlen, but the Albion bats were largely silenced by Jeff Jenkins and Robbie Knorr.  Sam Veitch homered in the fifth for the Tigers, who threatened to climb back in the game with rallies in the seventh and eighth innings but couldn't quite get over the hump.

The young Tigers finished with a 4-9 record against a schedule that included all road games and six games against clubs that qualified for the HTL or RRL postseason in 2019.

The Albion Tigers and Cambridge Blues combined for 27 runs on 36 hits on Sunday, but it was the Tigers that emerged with a 15-12 win.  The top four in the Tigers lineup had multiple hits: Matthew Klubertanz was 3x4 with a triple and scored four runs; Dan Zeimet had two hits and scored four runs; Jake Zeimet smashed three RBI doubles; and Cullen Oren went 3x6 with three RBIs.

Good stuff came from the bottom of the order as well, where Mason Simmons had two RBIs, Sam Veitch drove in a key run, and Drew Hanson picked up two hits in his Albion debut.

Brian Rusch threw the first five innings to pick up the win for Albion, while Jake Zeimet finished it out with a four-inning save.

The Albion Tigers took their pitching and defense to Jefferson on Sunday, but they were ultimately topped by more of the same in dropping a 2-1 decision to the host Blue Devils.

For the second consecutive game, Charlie Hatlen threw a complete game and allowed almost nothing, but was the tough-luck loser when the Tigers just couldn't push across the run they needed.  Other than scratching out two runs in the second inning,  Jefferson was unable to touch Hatlen, who walked one and struck out five.

Albion threatened against veteran right-hander Ike Roth but stranded two runners in each of the final three innings.  Hatlen  went 3x4 to lead the offensive charge as well, while Matthew Klubertanz drove home Cullen Oren with the Tigers' lone run with a single in the ninth.

Albion's Charlie Hatlen and Kendall Minick of Columbus each threw a gem on Tuesday night, but the Crawdads pulled out a 1-0 win on the strength of a first inning solo home run.  Both teams played errorless baseball behind their pitchers, who combined to allow only nine hits and four walks on the night.

Albion's initial threat came in the fourth inning.  Hatlen and Matthew Klubertanz both singled and Dan Zeimet walked to load the bases with one out, but two strikeouts ended the rally.  The Tigers threatened again in the seventh when Brice Christianson led off with a double and moved to third on a  wild pitch, but was unable to make it to the plate.

TIGERS BACK IN WIN COLUMN

The Albion Tigers got very good pitching and a couple timely hits on their way to a 3-1 victory over the Utica Association on Thursday night.  Starter Brian Rusch went 5.1 innings without allowing an earned run, and Jake Zeimet locked down a five-out save to give Albion the rubber match against Utica for the season.

After leaving the bases loaded in the first, Albion got a run in the second when Brendan Mades dropped in a blooper, moved up two bases on a single by Sam Veitch, and eventually scored on a wild pitch.  Dan Zeimet lined a single into rightfield in the third to drive home his big brother Jake to make the lead 2-0.  Brice Christianson provided a key insurance run for the Tigers in the 6th when he singled home Jake Zeimet, who had doubled to lead off the inning.

Matthew Klubertanz also contributed two hits to the cause, but the story of the game was the work of the Albion moundmen.  Rusch survived an early rally, went 1-2-3 in the third and fourth,  and then wriggled out of a bases-loaded fifth to preserve his lead.  Jake Zeimet then came in to gas the Association, stranding two runners in the sixth and pitching a scoreless seventh.

The Albion Tigers dropped a 9-6 decision to the Poynette Indians on Sunday in an exhibition game at Pauquette Park.  The Tigers built an early 6-2 lead, but left 15 men on base and Poynette used a five-run sixth inning to grab the win.

Dan Zeimet, Brendan Mades, and Jake Taylor each had two hits for Albion.  In addition to throwing 5.1 effective innings, Charlie Hatlen added a two-run single in the fourth inning.

TIGERS RALLY, BUT FALL AT UTICA

The Albion Tigers started hot and rallied late, but didn't have enough to catch the Utica Association and dropped an 11-9 decision in an exhibition game on Sunday afternoon.   The Tigers banged out nine hits (including five of the extra-base variety) and drew nine walks, but eighteen strikeouts ultimately did Albion in.

Charlie Hatlen and Brice Christianson each had two hits and a double for Albion, with Brian Rusch, Cullen Oren, and Matthew Klubertanz also providing extra-base hits.  Christianson drove home five runs on the day, including a bases-clearing double in the ninth that gave Albion life and brought the tying run to the plate.

The Albion Tigers traveled to Rio on Sunday and came home with a 9-3 victory.  The Railmen banged out 12 hits on the day, but Albion turned three double plays and committed zero errors, while pitchers Charlie Hatlen, Brian Rusch, and Jake Taylor issued only one walk on the day.

Rio got a run in the first, but Dan Zeimet walked and eventually scored an unearned run in the third to tie the game.  The Tigers took the lead for good with a four-run fourth, highlighted with a leadoff double from Lucas Gregory and two-run double from Adam Loveland.  As the game went on, Albion used an error and then RBIs from Rusch and Mason Simmons to tack on runs and push the final score to 9-3.  Jaden Johnson and Brice Christianson each had two hits for Albion as well.

TIGERS START WITH WIN AT UTICA

The Albion Tigers' 75th season finally got off the ground Thursday night at Utica in an 8-7 exhibition victory.  Eight different Tigers recorded base hits, and Charlie Hatlen struck out five in five to get the win before Adam Loveland survived a late rally by the Association to grab a two-inning save.

A couple errors and a two-run single from Jake Taylor staked the Tigers to a 3-0 lead in the first, and an RBI from Mason Simmons pushed the lead to four in the second.  With the score 4-3 after five innings, both teams starting hitting.  Two runs (on RBIs from Dan Zeimet and Loveland) in the sixth were matched by Utica in the bottom half.  Even after Jaden Johnson scored on a wild pitch and Brice Christianson singled in a run to make it 8-5 Albion, Utica came back to put the winning run on second base before Loveland induced two ground balls to close it out.