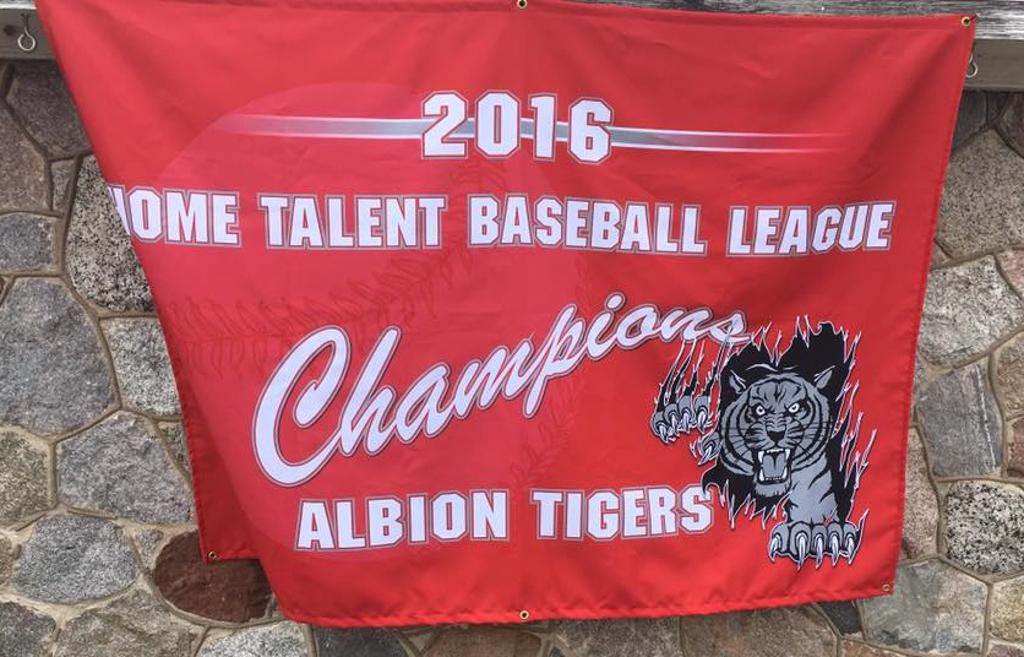 RT @Super70sSports: Nolan Ryan’s arm was so damaged by the first 5000 innings of his career he was only able to strike out 16 Blue Jays whe…

You did it, Tiger fans and supporters! We had a GREAT day out at Creekview yesterday, with fun and golf and food a… https://t.co/ZjonBmE4py

Only a few more days until the best party of the year! Still a little space at 2pm if you want in! Or, just come… https://t.co/oXEsndSbeT

RT @barryisthedon: I double checked and there is NOTHING about throwing the ball https://t.co/W2Galf9Q3U

Albion's Josh Eastman was named the Most Valuable Player in the Southeast Section at the annual Home Talent League awards banquet on Sunday night.   Eastman led the loop in batting average (.500), hits (36 in 16 games), and home runs (4) while playing seven different positions for the Tigers.  One of those positions was on the mound, where he threw 34.2 innings, compiled a 3-0 record, and 33 strikeouts with only 1 walk.

The Albion Tigers won their fourth straight Southeast Section game and kept their postseason hopes alive with a 15-2 victory at Lake Mills.  Josh Eastman and Charlie Hatlen combined to allow seven hits and two earned runs, but the story of the night was the Tiger offense, which put together an 11-run third inning on the way to banging out 15 hits.

After Albion scratched out an unearned run and Eastman hit a three-run homer to make the score 4-0, the rally started over and included RBI hits from Matthew Klubertanz (2x4) and Cullen Oren (3x3).  The inning was then capped by Eastman's grand slam to left, giving him 2 dingers and 7 RBIs in the inning.

Albion tacked on later runs with a two-run single from Adam Loveland, and RBIs from Lars Olstad (3x4) and Brennan Deegan (2x3).

The Albion Tigers defeated the Utica Association 7-2 on Sunday to win their third straight Southeast Section game, reach a 7-7 record, and stay alive in the race for the final postseason berth.

Lucas Gregory carried a no-hitter into the ninth on Sunday, leading the Albion Tigers to a 2-0 victory over the Evansville Jays at the Third Annual Wally Olstad Classic at Edgerton's Tobacco Days.  Two singles in the ninth constituted Evansville's only rally of the game, but two fly balls to left fielder Lars Olstad ended the game and sent the large crowd into a roar.

The only runs of the game came in the bottom of the fourth, when Cullen Oren's leadoff single was followed by Adam Gregory's misplayed sacrifice bunt, putting runners at first and third for Olstad, who promptly singled to center to drive home Oren.  Two batters later, Adam Gregory scored on Dan Zeimet's groundout, giving the Tigers all the runs they needed.

Both teams scored early, and the game was tied 3-3 until an RBI single from Dan Zeimet and a two-run single from Josh Eastman gave Albion a lead in the sixth.  The Tigers were able to tack on four more in the seventh, highlighted by a bases-loaded single from Klubertanz, who had 3 RBIs on the day.

Josh Eastman again did the heavy lifting on the mound, allowing only one earned run over seven innings.  He was relieved by Jake Zeimet and Bryant Schulte, each of whom threw a scoreless inning to close the game out.

The Albion Tigers got outstanding pitching, flawless defense, and just enough offense to pull out a well-earned 4-1 victory in eight innings against the Cambridge Blues on Thursday night.  Charlie Hatlen was masterful on the mound, scattering 8 hits and fanning six over 7.1 innings to earn the win, and Cullen Oren slammed the door in the eighth with the tying run at the plate.

Albion scratched across a run in the sixth with an RBI from Adam Loveland for a 1-0 lead that held up until the Blues scored in the last of the seventh to force extras.  The eighth inning was all Tigers though, as Loveland's two-out single plated Josh Eastman for the lead and a Matthew Klubertanz blooper into left scored two more runs.  Oren, Loveland, and Klubertanz would all finish with two hits apiece to lead Albion's 11-hit attack.

The Albion Tigers earned a 7-2 victory over Cambridge on Sunday to preserve their postseason hopes.   Josh Eastman threw a complete game for the win, striking out seven and walking nobody on his way to allowing only one earned run.  He also joined Aaron Laskowski by going 3x5 at the top of the order, and keying a 12-hit Albion attack.

The ballgame was tied 2-2 for much of the way, until the Tigers broke loose for 5 runs in a decisive eighth inning.   Adam Gregory reached on an error, Jesse Appel had an infield single, and Jake Taylor was hit by a pitch to load the bases with nobody out.  Logan Hein then stroked a single into rightfield to plate two runs, and Laskowski drove home another with a groundball to short.  Eastman then delivered the dagger with a two-run single, scoring Jake Zeimet and Matthew Klubertanz to cap the rally.

TIGERS WALK OFF AGAINST WATERLOO!

The Albion Tigers and Waterloo Firemen played a quick and scoreless five innings on Thursday night, as Albion hurler Charlie Hatlen and his Waterloo counterpart Nicholas Brosnak each were sharp and had strong defense behind them.

However, it all changed when both teams were able to scratch across a run in the sixth inning... and when Waterloo got an unearned run in the seventh, the Tigers went to the bottom of the last facing a 2-1 deficit.  But four straight singles from Matthew Klubertanz, Marty Johnson, Cameren Wileman, and Aaron Laskowski allowed Albion to overtake Brosnak for a 3-2 Eastern Night League win.

Hatlen was outstanding on the mound, throwing six innings of one-run ball and walking none.  Cullen Oren followed him on the mound, also walking none and earning the win in relief.  Laskowski not only drove in the winning run, but scored Albion's first run in the sixth inning on an RBI from Brennan Deegan and had two hits on the evening.  Klubertanz also contributed two hits as well as five putouts in centerfield, two of the diving variety.

For the second straight week, the Albion Tigers struck for 13 runs in a Southeast Section game, beating McFarland 13-1 to even their record at 3-3.  Albion banged out 13 hits and 5 extra-base hits, led by Aaron Laskowski (4x5) and Josh Eastman (3x4).  On the mound, Lucas Gregory celebrated his return to Albion by striking out 9 Muskies, while Bryant Schulte threw two nearly perfect innings to finish up.  The Tigers did not commit an error on the day.

Albion didn't wait to get on the board, when Laskowski led off the game with a double and came around to score on Jesse Appel's groundout.  Laskowski doubled again in the second inning to drive in two more and make the lead 3-0.  The Tigers then erupted for 10 runs in the fifth inning.  The inning started modestly enough, with an unearned run scoring on a botched fielder's choice and Jake Taylor drawing a bases-loaded walk to plate another run.

At that point, the floodgates opened with four straight RBI hits from Matthew Klubertanz, Logan Hein, Laskowski, and Marty Johnson, making the lead 10-0.  Josh Eastman then delivered the dagger, in the form of a towering three-run shot to centerfield to cap the scoring.

After a daunting schedule and some tough luck to start the Southeast Section schedule, the Albion Tigers got back in the win column on Monday with a 13-7 win at Cambridge.  The Tigers are now 2-3 in Southeast play.

Despite falling down 2-0 quickly in the first inning, the Tigers pulled even in the second on solo home runs from Cullen Oren (3x5) and Kyle Johnson.  RBIs from Adam Gregory (2x4) and Cullen Oren in the third made the lead 4-2 before Albion took control with four in the fourth and four in the sixth, highlighted by Cullen Oren's three-run triple.  On the day, five Tigers collected multiple hits, including Gregory, Cullen Oren, Tyler Oren (4x5 with 4 runs scored), Aaron Laskowski (2x6), and Josh Eastman (2x5).  RBI leaders included Cullen Oren with 6, and Gregory with 3.

On the mound, Jake Zeimet threw 6.1 innings of three-run baseball to get the win.  He was followed by Cameren Wileman, Cullen Oren, and Eastman in relief.

TIGERS GET 2018 STARTED WITH BIG WIN

The Albion Tigers got their 2018 season started with a bang on Sunday in a resounding 8-1 win over the Fort Atkinson Generals.  Young pitchers Jake Taylor and Jake Zeimet combined to allow only five hits, and veteran hitters Aaron Laskowski (2x5) and Josh Eastman (4x5) combined for six hits and four RBIs as the Tigers avenged last year's postseason loss and started Southeast Section play 1-0 headed into a May 12 game at Evansville.

The Tigers got off to a fast start in the bottom of the first, with RBIs from Cullen Oren and Adam Gregory to get a quick 2-0 lead.  That lead expanded in the third, when three Fort errors and singles from Laskowski and Brennan Deegan gave Albion a 5-0 lead.  After Eastman's RBI double in the 6th, Laskowski's two-run double in the 7th drove home Marty Johnson and Matthew Klubertanz to push the lead to 8-1.

All the while, Taylor was setting the Generals down in short order.  He threw only 67 pitches while cruising through six innings before Zeimet showed up to wriggle out of a jam in the seventh.  Zeimet then allowed nothing in the 8th and 9th to lock it down for Albion.